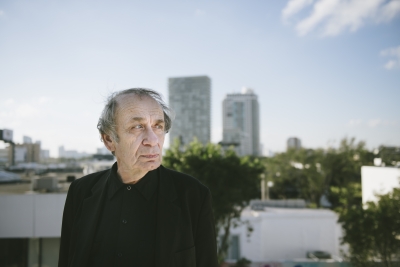 Each December, the Design Miami/ Designer of the Year Award recognizes an internationally renowned designer or studio that has made a mark on design history, pushing the boundaries of the discipline through an exceptionally influential and innovative vision. This year, Design Miami/ is proud to recognize Acconci Studio.

In honor of the award-winner, the Miami Design District is hosting a temporary, site-specific installation of work by Acconci Studio entitled “HERE/THERE, NOW/LATER,” which explores the boundaries between the virtual and the tangible. Acconci Studio has invaded and transformed two spaces in the District’s Buena Vista Building, creating an ephemeral, experiential glimpse into the thinking processes and influences that have shaped Vito Acconci’s creative output from the 1960s until today.

Also on view is a model of Acconci Studio’s Klein-Bottle Playground, representing the Designer of the Year commissioned project that is to be permanently installed in the Miami Design District by 2014.

About the Studio
Acconci Studio’s design and architecture comes from another direction, from Vito Acconci’s background in writing and art. His poems in the late 60’s treated language as matter (words to look at rather than through) and the page as a field to travel over; his performances in the early 70’s helped shift art from object to interaction between art-doer and viewer; later in the 70’s, his installations turned viewers into participants; in the early 80’s, his architectural-units could be transformed by users. By the late 80’s his work crossed over through the formation of Acconci Studio, a design firm that mixes poetry and geometry, computer-scripting and sentence-structure, narrative and biology, chemistry and social-science.

The Studio uses computers to give form to thinking and uses forms to find ideas. They make not nodes so much as circulation-routes; they design time as much as space. Their design starts with clothing and ends with vehicles – in between, they design buildings that slip into landscape and vice versa. They make spaces fluid, changeable and portable; they make architecture subservient to people and not vice versa. They anticipate cities on the move. Built in the last decade is, in Graz, a person-made island where a bowl (the theater) twists into a playground on its way to becoming a dome (the restaurant). Being built now, in Indianapolis, is an interactive tunnel through a building where pedestrians and cyclists set off lights that swarm around them like fireflies.

The Design Miami/ Designer of the Year Award is supported by: